Yes, yes, I know. Typical me. I spend a whole year gearing myself up to do cartoons beyond the blog, and I end up doing it for the last newspaper edition of the year. Anyway, behold, the second comic ever(!) to appear in newsprint. 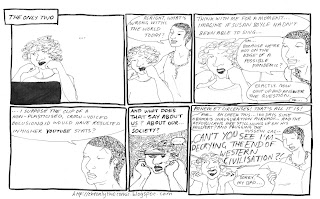 If I get organised, I'm thinking I can carry on with the story* of my 'only two' gals online, and do 'topical' comics for the/other newspapers featuring other 'only two's. Maybe throw a few 'Made of Win' comics in as well.


EDIT: And ah yes, there's a great illuminous typo, the likes of which I haven't made since for ever. Typical me, as ever.


*And yes, that is still happening. Be prepared for a massive comic dump around mid-June/early July.
Posted by laBiscuitnapper at 12:11 AM 3 comments: