I am actually working on comics, btw, for all it might seem I've been seduced by the pleasures of MATLAB programming and tracking (what are hopefully) dyneins. The Captain Hamish prologue is halfway through final inking before I scan it in and add the words and some finishing touches. I think I've also come close to working out the style I'll be using for 'The Oligarchs' (though that's the easy part, tbh. Let's see if I can keep it) which was more time-consuming than I'd care to admit. Currently toying about with printing a couple of pages in the student newspaper, but I'll just have to wait and see what the new editors would like for the newspaper comicswise before I get all excited.
Posted by laBiscuitnapper at 6:48 AM No comments:

Yes, I am mildly insane, what of it?
Posted by laBiscuitnapper at 11:46 AM No comments:

Oh yeah. This time, it's The Man who's going under reconstruction. Here are some general sketches I did trying to settle on a look for the new semester: 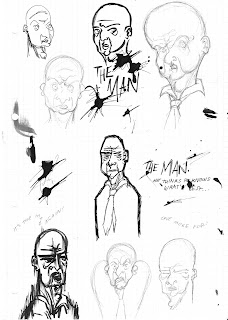 And here is the new look for The Man! I'm really digging it. Planning to go down a very inky, dark look to the comic, something more like 'Payne's Grey' and also something that just suits my general mood about these sort of things. I'm at the angry age. 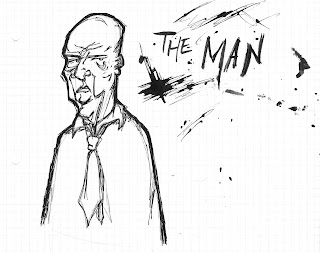 Posted by laBiscuitnapper at 1:16 PM No comments:

Some people will find this rather NSFW (and I say some because I don't personally, but you never know who might traverse across this page on the world wide web). And with rubbish inking too, but there you go. In my defense, I claim extreme anger and liberal self-righteousness. 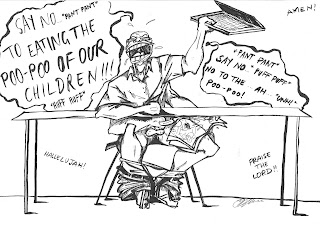 And for anyone behind the youtube zeitgeist, here is the remixed version (you will just have to find the original yourselves):

Posted by laBiscuitnapper at 3:28 PM No comments:

One small step.
Posted by laBiscuitnapper at 3:31 PM No comments:

A new twist on the Malawi case

It seems this is as much an erasure of trans issues as it is state endorsed homophobia.

Thank you keeva!
Posted by laBiscuitnapper at 3:55 PM No comments:

Freedom without my lover is useless and meaningless..

Freedom without my lover is useless and meaningless..

Thanks to Anengiyefa!
Posted by laBiscuitnapper at 8:41 AM No comments:

Of studies and comic conventions...

Coming towards the end of semester now, which means exam season. I won't be posting any more comics until late June.

However, on a related note, I'm helping to organise a small sci-fi/comics convention in Manchester this July as part of an Oxfam fundraising initiative. We've got some writers lines up - and hopefully some more who'll turn up - to do readings, panel discussions etc etc. The date we're planning for is the 8th July. If you'd like to get a table or would like to donate books/comics/art that we could sell, please feel free to email me. If you live in the area, just go to the Whitworth Park Oxfam shop and ask for Emma, who is also organising the event.

PS If anyone knows of any really cheap printing presses in the UK, please let me know aussi!

EDIT: I am now using what used to be my 'essays' blog (http://rantingbiscuit.blogspot.com) as my homepage so don't forget to follow for more writing, art and non-The Only Two related comics!
Posted by laBiscuitnapper at 2:26 PM No comments:

The return of the man... again!

This comic made me feel kind of dirty though, as the article its for is based on a sliiight misunderstanding of a statement made by his googliness, the third grand Mugwump of Britain, Dr(Prof?) David Starkey on Question Time. In the article, the writer attacks his moniker of 'feral children' as symptomatic of his bourgeois elitism and general not so endearing old-fashioned rather wanky bluntness. However, having actually watched the episode in question... Prof Starkey didn't demonise these so-called 'feral' children. He even described the moniker as a horrible one, one that reflects British attitudes to children as much as the state of the yoof today.

Now I'm a huge Starkey fangirl - he's pretty much the white, atheist, gay version of my father and I do love my father, even if he can be an annoying **** sometimes (hey, I'm not hatin'! I got that gene too!) - and I also freely admit that he's just plain wrong about a lot of things (it could all be an act, but as a blue-stocking type feminist, even humorous misogyny is aggravating and as a humanist, the perhaps-ironic mild flavoured middle-class bigotry gets tedious, you know?) but in this case, he actually wasn't as bad as everyone seems to think he was (even on the show, there seemed to be a weird effect where some people jumped on his comments attacking him for saying something... that he didn't. Very odd. Chinese whispers is one thing, but I thought the ability to completely miscontrue something you heard barely a few seconds ago was a talent reserved for philosophers, theologians and Nigerian parents). But then, as he also said, this is part of his background. For all he usually sounds like he's more clued up on the Britain of yore than that of today, he's not completely lacking in compassion.

He's just drawn that way.
Posted by laBiscuitnapper at 9:26 PM No comments: 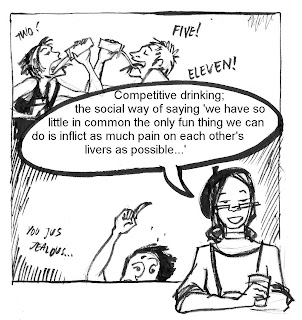 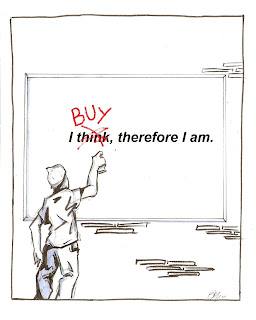 Again, nothing particularly original but I've been feeling rather low lately and had a tonne of other stuff to catch up on. Hopefully things will get a bit better soon because one thing for melancholia is that it's dead boring, even if you're lucky enough to get something creative out of it.
Posted by laBiscuitnapper at 8:19 AM No comments:

The future of airport security... 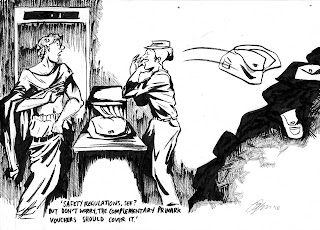 New comic for article about airport security. More of my usual style creeping in, which I'm more or less okay with, though, once again, the text rendering leaves much to be desired. You wouldn't think I was studying physics either from the way the hand luggage defies most known laws of motion (without the excuse of travelling at relativistic speed). Hopefully it will be okay for the newspaper.
Posted by laBiscuitnapper at 1:26 PM 2 comments: 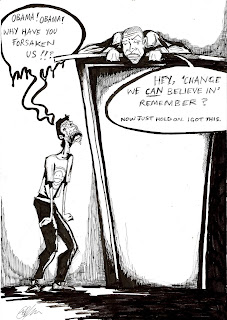 First political article of the semester but unfortunately not quite right for 'The Man' (who only works with British politics anyway tbh). Getting fancy with my brand new motherlovin' brushpen: le brushpen, c'est magnifique! Wanted to try out an extreme, chiaroscuro look but only got half way. Still more successful than I thought it would be and am now getting new stylistic ideas for future comics. Next time, next time.
Posted by laBiscuitnapper at 7:37 AM No comments:

And in glorious technicolour!

At the moment I'm starting work on a longer project so any storylines for 'The Only Two' will be put at rest. Of course I'll still be posting the newspaper comics here but updates on the other stuff will go up on my much neglected 'art' page.
Posted by laBiscuitnapper at 7:24 AM No comments: